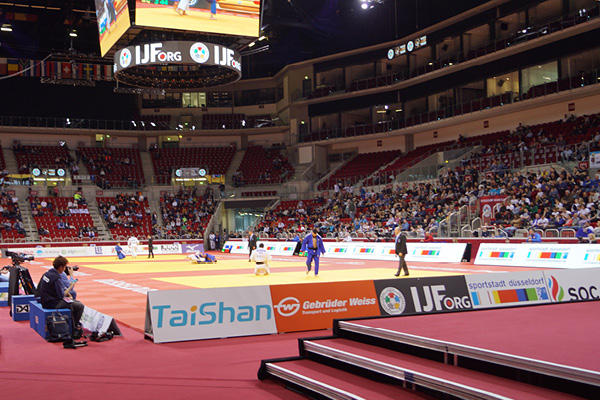 InnScreen Y4 HE convinces with its outstanding image quality. From February 22 to 24, 2019, 9,000 fans in Düsseldorf visited the Judo Grand Slam in the ISS Dome. More than 600 athletes from almost 100 countries competed against each other. LED bands framed the judo mats of the competitions in an advertising effective way. Because of the typical short distances needed for this sport, high-resolution LED modules were used. Innlights Displaysolutions from Wuppertal provided the technology and support, as they did the year before at the premiere of the Judo Grand Slam in Düsseldorf.

The high-end InnScreen Y4 HE LED panel now in use offered the fans an optimal view and provided an excellent quality background for photo and TV coverage. In addition to a fine pixel pitch of only 4.81 mm for a sharp and high-resolution image, the Nationstar Black Face 1921 LED provides an excellent image contrast of 6,000 : 1. Thanks to the high “refresh rate” of 3,840 Hz, the video playback is smooth and jerk-free, which ensures perfect video quality for TV coverage. Innlights used its own in-house developed Innlights Remote Control Application to feed the LED strips. Kolja Birkenbach, Innlights IT/Media Technology: “We use our RCA not only for user-friendly LED and LCD fixed installations, but also for efficient feed at events. Here in the arena, we use it to play back several LED strips with a total length of around 50 metres”.

In addition to showing advertising image content, the bands were used as score boards. For this purpose, the LED bands displayed the competition data edited by the judges directly on the corresponding judo mats. Thus, the spectators not only saw the advertising messages of the LED-bands, but also had all information about the competition directly in their field of view at all times.